People keep asking me why I love to use the word white_admiral in my informal signatory. Well, the history happened to be like this. I used to have a hobby when I was in my lower secondary school which was about 10yrs back..emm, not really a hobby, but kind of habit.. Reading the dictionary!! Yeah, you can call me lame or whatever, but that's the truth.hehe. Masa tu form 3 kot.. I would take ten minutes before sleep time to read one page of the dictionary.. From word to word..Then one day, I came up with this word, white-admiral.. It sounded very nice n the meaning really caught my attention. A BUTTERFLY..the scientific term for white admiral is Limenitis Arthemis .

Limenitis Arthemis is a polytypic species of North American brush-footed butterfly, common throughout much of the eastern United States. It has red spots on its underwing and the top of the wings are notable for their iridescent blue markings. On the other hand, it has a large white band traversing both the fore and hindwings. 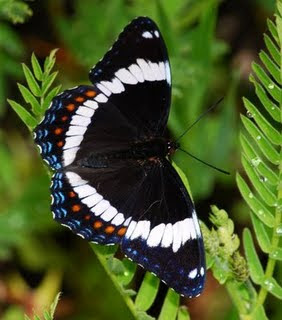 White Admiral. Beautiful..Isn't it?
At first, I love it for the word itself.. Then when I find out more about it in depth, I love it for the creation behind the word.. A beautiful and strong butterfly that flies from the early morning until soon after dusk... Great creation isn't it? And from there, I started to describe myself as white admiral. For those who are close to me might have known this, but for those who haven't, this might be a little extra information for ya!!hehe..