Hye there..
I come back with something heavily thought in mind rite now.. Let me start with telling you one good news. My elder brother is getting engaged in less than 2 weeks from now. And too bad that I'm going to miss the very first event in the family because I'm here, all abroad. Shame on me. But what else can I do apart from watching the momentous event from here. Video conference maybe??hehehe..When it comes to engagement, both families have agreed on certain things regarding the wedding that is planned to happen somewhere around February 2011. And this time I'm not gonna miss it!! I'm going to be there no matter what.

It has been a common practice these days for children to get married after they graduate. For a guy like my brother, he is expected to have a stable career (Alhamdulillah, he is now doing a lot of money more than everyone), a car, a house and of course some money for his wedding including the dowry. The dowry is something that a groom is obliged to give to his wife on their wedding day, usually, but not always, in monetary form. Talking about this, he agreed to give the amount of RM***** to his future wife. Lucky her. I know my brother is more than able to give her that amount. The thing is, I'm sure that people will start talking about it especially the ones in our own family. But who cares? As long as he affords to do so.
But!!Yes, there's a but over here. I hate it when people start comparing the amount of the dowry to the education level. Let say if the bride is a diploma holder, she NEEDS to get AT LEAST RM8k. If she graduated as a degree holder, she MUST get AT LEAST RM10k. And the amount increases gradually until the bride reaches the highest education level. Yeah, I know it is not compulsary but it is traditionally applied to the Malays nowadays. 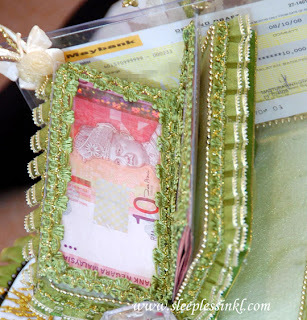 An example of dowry for the bride
(photo courtesy from www.sleeplessinkl.com)

I'm not going to bother about this matter if it has nothing to do with me. Unfortunately, I do have to care since people start talking about MY dowry while I haven't even yet completed my 1st year since I started my PhD. Those people said, "Tu nak pi belajaq tinggi2 tu sebab nak hantaran tinggi la kan". Some people also said, "Sapa la nak masuk meminang kalau kat depan nama ada title Dr Falsafah". It hurts me the most when some of them said, "Nanti bila dah belajar tinggi mesti nak cari yang sama taraf ja. Yang dok ada tu kena tinggal la". It was really hurt hearing people talked about something like that behind your back.. Sighss..=(
Sometime I asked myself, is it a right decision to continue my study up to this level before I get married? One part of me says yes. But another part of me says no. And I keep thinking hard about this. I know that I should not bother about what people say. Do whatever the best and what I think the right for me. The rest, let Allah swt handles. But I still wish that I could just keep those people mouths shut one day!!ehehe..=)

p/s: We always emphasize on what other people may think, may say about us. However, do we think of what Allah will say about us? Think about it dear Amirah..=))
Posted by amirah at 1:17 PM

amirah dear, i dont think education should be a matter here. i think what really matters here is niat. if ur family and u are ok with accepting less-than-grand dowry, then why not. korang punye hak untuk set kan harga hantaran tu and tade sape ade hak nak ckp pape. semua terpulang pada korang bcoz its all within your control. so u do whats best for u, and for the people out there, just ask em to shut the hell up! ;)