When my little Adam turns two

All I can say is, Adam's second birthday party on 15 May 2011 was heaps of fun. With the theme Jungle Party, inspired by the movie Madagascar, we used a lot of greens and animal prints to turn the hall into a jungle atmosphere. For peace of mind, the safari bash was planned six-eight weeks in advance including the decor, gifts and menu items. 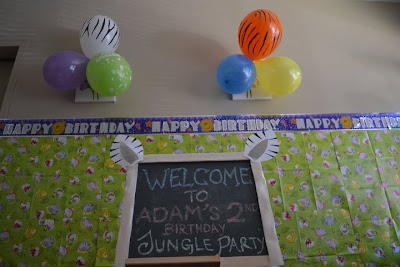 The party started shortly after all the invited kids arrived. Kalau nak tau, masa tu Adam masih lagi terbongkang tido dekat tengah hall. Dia simpan energy untuk meloncat masa majlis nanti. Orang buat bising tepi telinga pun dia boleh tak sedar. Hebat tak hebat?
While waiting for Adam to get his energy fully recharged, we decided to let the kids play a game for a good while. Poisonous box it was. We had fun looking at how they immitated the animals inside the jungle. And most of them won the interesting prizes from this game.
Then, it was lunch time!! Kak Fish and Kak Emy prepared finger foods yang senang untuk budak-budak makan. Mini pizza, sausage roll, vege meatball, mini doughnut, caramelized popcorns, apple strudel, chocolate brownies etc. Seronoknya la hai jadi budak-budak. Rasa macam nak patah balik ke zaman dulu, when I was still a young energetic little girl..=))
Birthday cake time!! I think Adam knew something important was happening when we were all ready for the birthday cake session. Having his dad holding onto him, he watched his mum lit the candle on his super cute birthday cake very intently. He was mesmerized when we had all sung happy birthday to him. As soon as the candle was removed, the kids swarmed in.
We continued the event with another game just to make sure that all the kids really enjoy their time at Adam's party. Nobody went back home empty handed. To add into the fun, they also had their faces painted by Yana and her magic fingers. Before balik tu, tibalah masa untuk bukak hadiah. Oiii, gila lah budak-budak zaman sekarang. Hadiah semua tak agak-agak. Teringat zaman kecik-kecik kalau dapat hadiah sebatang pensel tekan dari kawan pun rasa terharu gila. hehehe.
Right when the clock struck 3pm, we need to wave goodbye to all the kids when their parents arrived to pick them up. Ohhh, having 25 kids in one small area definitely turned the space into a hugeeeee mess. Tapi bila tengok muka ceria semua kanak-kanak masa balik tu, hilang semua penat tau.
Some people may say that the kids won't remember any of these parties when they're older. It doesn't matter whether is is true or not. Maybe Adam didn't really understand all the party thingy now, but there will be plenty of photos for him to look at when he is older.
All photos were taken from Kak Fish and Yana's FB. Months of efforts really paid off right? =))
Posted by amirah at 2:15 AM

Best sangat2!!! hehehe.. walaupun pening, but for me kids are really adorable..=))