I had a very full+busy+exhausted day today!! I went down to the dining hall at 7.30am and ate breakfast just like a King with a piece of hash brown, one half-cooked egg, red beans, a slice of raisin toast, a bowl of mixed-cereals, a cup of yogurt, milk and coffee. After that, we headed down to the lecture hall for the welcoming gathering and right at 11am, we got something to eat AGAIN. This time I had a cup of hot chocolate, a piece of apple pie and a slice of chocolate cake.. Gosh, I'm not surprise if I put on a few kilos by now.. :p
The lectures were pretty exciting.. It's just that I feel like I couldn't go on with the measure Theory (MT) course.. I'm getting a permanent head damage if I continue taking that course once again..huhu.. One thing is, the lecturer for MT was really funny!! I swear!! I never met any lecturer as funny as him in my whole life.. Have a look at the picture below.. I don't think anybody would dare to put that kind of face inside a public official website.. But he did it!! Now u trust me why am i saying that he is really funny rite??hehe..

Marty Ross..he's kind of cool, isn't he?
There was a special talk by Burkard Polster about Juggling just now. He is a Maths lecturer from Monash University. I believe he did a very interesting research on Juggling many2 years ago and I was totally impressed by his talk and his live performance in juggling 2,3,4,5 up to 9 balls just now. By the way, u might not known what juggling is rite sweetie?? Okay, juggling is a skill involving moving objects in which the juggler throws objects up to catch and toss up again.. I was very surprised when I realized that all the juggling things are generated from the idea of Maths theories.. Don't worry, I'm not going to explain it here.. I know u hate maths, don't u??ehehe..
We were given 3 different colours of balls and we spent about 45mins juggling the balls at the garden. Up until now, I still couldn't get the idea of tossing and catching the balls yet. All that I did was throwing, dropping, and picking up the balls over and over again..sighs.. Take a look at these pictures on the process of learning how to juggle just now. Unfortunately, there are no pictures of me!! Only Mick..But we did the same thing..Check these out!!=)) 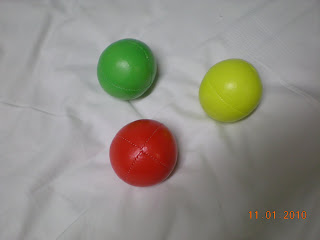 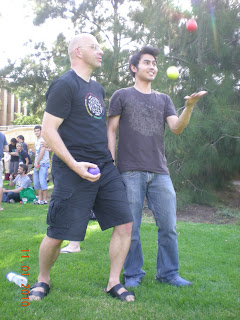 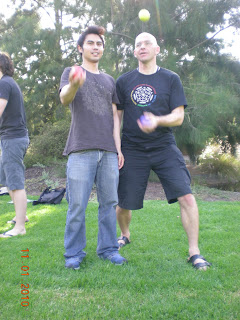 p/s: We have to work in pairs to make things easier but both me and Mick still couldn't get all those juggling ideas.. We have to work harder so that by the end of this course we at least know how to juggle 3 balls.. Mick, let's work on it!!!=))
Posted by amirah at 7:13 PM