Dear diary,
Have you ever tasted ginger? Sure not rite? Me? Yup, I did. When I stayed at home, I noticed that my mum takes ginger-flavoured water regularly. And she sometimes asked me to drink it along with her. Bagus untuk kesihatan katanya. But she didn't drink it just like that. It won't taste good. Biasanya mak rebus halia tu dengan daun pandan, kayu manis and cengkih sampai mendidih. Perasan tak, semua herbs yang wangi2. Then, pour some into a cup, add a teaspoon of honey, stir it well, and drink it once a day. Alhamdulillah by the age of 50, my mum's health record is still at her best condition. Maybe the benefits of ginger really works on her. Maknanya dari kecik2 dulu I dah terbiasa minum air halia sebab mak suruh. Padahal taktau apa2 pun.hehe.. 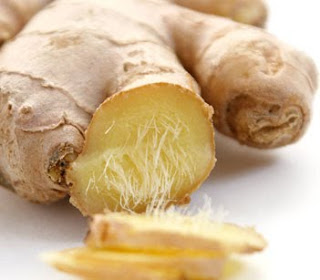 But then, end of last year, I had a bad cough for more than 3-month. I coughed, coughed over and over again. Makan ubat jangan cakap la. Tak larat nak telan dah rasanya. You know those medicine normally include a little amount of drugs. So, bila rasa macam takde perubahan, I stopped taking medicine to avoid consuming drugs into my body which is really not good for me. Lantak la nak batuk ke ape. Felt annoying but I couldn't help it. Nothing works on me that time. Whenever I talked to my mum, she keep telling me to drink her ginger water. Tapi I degil, malas nak buat sendiri. Biasanya mak buat, tapi bila dah duduk sini, kena buat sendiri mmg tak best.huhu.. Bila fikir2 balik, agaknya sebab I tak ikut cakap mak la batuk tu tak baik2 kan. Ha, padan muka!! Lain kali jgn degil tau!!
So one day, When I was doing my work at my office, I coughed soo badly until attracted my officemates attention. Mana taknya, batuk kong kang kong kang, sah2 la mengganggu orang lain kan. So, one of these fellow, Bothaina, suggested me to drink ginger water with honey. She said it is a really good natural thing for self healing. She also mentioned about how ginger makes an appearance in the Quran, being one of the two aromatics of Paradise; the blessed drink ginger-flavoured water from the fountain called Salsabil. The warming action of ginger, together with the cooling effect of camphor, symbolize the protection from cold and heat. That is an astonishing fact of ginger that I never knew. Btw, Bothaina is a Muslim from Libya, and she talks from a Muslim point of view.
So, I decided to start doing as what she suggested. Or to be more exact, as what my mum asked me to do since long ago. At the beginning, I took it twice a day, one cup in the morning and one before sleep time. After a week, I was amazed to see the healing sign. Daripada batuk macam king kong, dah kurang jadi batuk2 manja je tau.hehe. So, I continued taking the drink for another week. Alhamdulillah, batuk yang dah berbulan2 macam orang sakit kronik tu hilang sepenuhnya. And until now, I don't stop drinking it. Four times a week just to keep a good health. Tambah2 pulak musim sejuk camni, minum ginger memang best untuk memanaskan badan..=)) 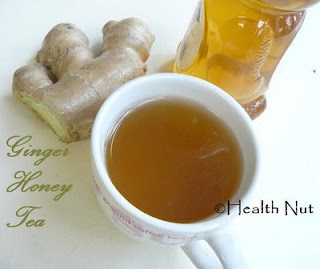 A cup of tea together with ginger and honey surely taste good
(Photo courtesy from http://kopiaste.org/)